As children move through school often their language difficulties can sometimes become more subtle.  At first glance they seem to be able to respond to questions and can express themselves in longer sentences, but when things become more complex they can start to become confused.  One of the things that can particularly trip up children with language difficulties is words with more than one meaning.  For example, the word “orange” can be both a colour and a fruit.  These can be confusing for children because you need to understand the context in which a word appear in order to know which meaning of the word is meant.  Here are some ideas for working on words with multiple meanings:- 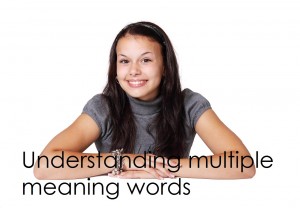 This is one of those skills which takes a while to develop and we can all learn new meanings of words even as adults.  So be patient if a child you are working with takes a while to understand these and don’t panic if they know some but are still confused by others – this is expected.

Do you have any other ideas for working on words with multiple meanings?  Do share them below.