7 games to encourage listening in a group - Speechbloguk

7 games to encourage listening in a group

This is an issue that has come up for me a couple of times this week.  I work with a couple of children who have comprehension difficulties but are making good progress and can now follow simple instructions in school as long as they are given 1:1.  However, they struggle when instructions are given to the whole class and tend to either copy other children or wait until they have been asked individually.

This is a difficult thing to work on and the games in this post are certainly not the whole answer.  The first thing I usually do in this situation is to watch the child in the classroom and try to work out exactly why they are struggling.  Is it that there is just too much language?  Do they understand the words and the sentence structures that are being used? Do they realise that words like “everyone” include them?  Are they aware of what is going on around them in the classroom?  Are they able to shift their attention from one thing to another?  All of these things are likely to be having an impact and the vocabulary and language structures etc. will need to be worked on as well. 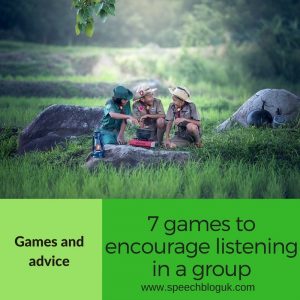 Here are some suggested ideas.   These ideas are aimed at children whose comprehension skills at the level of a 5 year old or older:-

A couple of words of advice before I close.  All of these games are very difficult for some children, especially those with language difficulties.  Here are some suggestions about how to introduce them.

What other group listening games do you play?

Uncategorized
Top 10 useful tools for a speech therapist.
Teaching the function of an object