Being mindful of others. - Speechbloguk

Being mindful of others.

This is a hard post to write and I have been putting it off for a while.  I really don’t want to offend anyone or appear condescending.  I hope this is an important message to share with all professionals out there.  So please read on and see what you think. 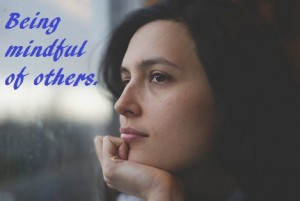 Nothing changed my opinion of ‘parents’ more than becoming one myself.  I only have one child, and in the grand scheme of things he was very good and easy.  I had about a year, just after going back to work where it felt like neither of us slept at all.  I’m sure I was running on coffee and little else! Only one mad dash to A & E with a spilt scalp which had to be glued.  No broken bones yet – touch wood! I have a supportive husband and a job I love.  So I fully realise I didn’t have it too bad, and being a parent is still the hardest thing I have ever done.

One of the things I love about working independently is getting to see children in their homes where they are settled and confident.  They haven’t just been dragged into a clinic, or had to wait in a waiting room when they would rather be running around outside.   However one day, a number of years ago now, will always stick in my mind.

I was working with a lovely young girl.  She was four years old with beautiful green eyes and the most contagious laugh.  She had significant learning difficulties and we were working on her first few words.  She had just learnt that saying ‘words’ would get her something she wanted – Fantastic!  But at the time one of her main forms of communication was shouting and screaming.

One week, in the middle of our session, the doorbell rang and outside waited a supermarket delivery man.  He had arrived later than expected.  The door bell was always a point of contention, as it was both noisy and annoying, but also signalled the arrival of something potentially exciting.  So screaming commenced.

The delivery man didn’t say anything when he was greeted with a screaming child, but there was a look on his face.  I’m sure he didn’t mean to look disapproving or confused, but our facial expressions often give us away.  Then her mum calmly stated “She has special needs and screaming is her way of talking at the moment”.  Again, the delivery man didn’t say anything.  The food was quickly moved into the kitchen and we continued our session.

However, as I watched, my heart went out to her mum.  How many times a day does she have to explain herself and her child to strangers?  How often does she get those looks? How many times has she made that calm statement?

It also made me think about sitting in a clinic, in my pre-parent days, being annoyed at the parent that was always late for their session.  Or wondering how they could forget an appointment altogether.  We can all get wrapped up in our day and not think about others.  Now I am not saying that SLT’s without children aren’t mindful, but I think we could all do with giving the benefit of the doubt sometimes.

I think as a profession, SLT’s are generally good at listening, but equally we have to make quick decisions about a child and their communication skills, their family and the best way to help.

You really don’t know what someone else has been through that day, let alone in the last few months or years.  Even if from the outside someone’s life seems good, you shouldn’t make those judgements about them.

Really, we should all just be nicer to each other.