How to encourage children to take turns - Speechbloguk

How to encourage children to take turns

Taking turns is something that all young (and some not so young!) children find difficult.  It can be particularly challenging for children with language difficulties.  Language delay can often mean that social interaction is a little delayed as well.  Turn-taking is something I often suggest for nursery staff to work on with a preschool child. 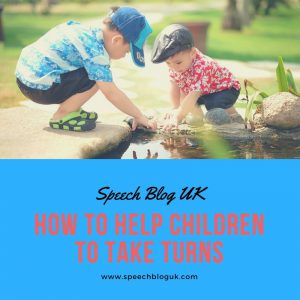 It’s usually best to start with taking turns in a game with an adult, then move on to the same thing but with another child instead.  Here are some ideas and tips to help.

One final thing.  Some children (particularly, but not exclusively, those on the autistic spectrum) are very absorbed in their own world and just find anyone interfering in their play very stressful and upsetting.  If your child is in this category, they may not be ready for turn-taking yet.  Instead try some of the tips in this post instead.  You can come back to turn-taking later on when they are ready.