A little while ago, Elizabeth posted an introduction to narrative therapy – what it is, why it’s important and some suggested resources to help work on these skills.  You can read that post here.  There, she talks specifically about the Black Sheep narrative packs. These packs use a particular framework for teaching narrative.

What happened?  (with lots of expansion of this one for older kids that we’ll go into another day)

(These are often presented in a different order with older children, where we tend to focus on talking about the setting first and then moving on to characters afterwards).

I find this a helpful way of introducing narrative skills to children and giving a structure to basic stories.  This is the first of a series of posts looking at each aspect of this story-telling framework.  Today’s topic is “who” or the characters of stories. 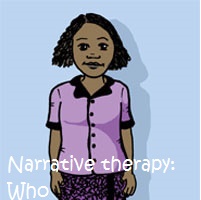 When I introduce the who, where and when aspects to younger children (3-7 year olds) I tend to spend some time working on the meaning of these question words.  Question words are extremely difficult for children with language difficulties to understand as they all sound very similar and are quite abstract concepts.  I use pictures and Makaton signing to help them to differentiate between these different words and what they mean.

We play lots of games aimed at them being able to understand a who question, and also talk about people and characters.  This tends to involve a lot of vocabulary work.  With this age-group I mostly concentrate on just naming people or animals, or using a single word to describe them (eg a unicorn, an alien, a policeman, a granny etc).  Here are some examples of things I have done – many of these ideas are listed in the Black Sheep resources, and lots more too….

With older or more able children, we then move on to talking more about the people and really describing characters, as well as using more imagination to invent their own characters.  Here are some ideas of activities for older children to work on the who/character in stories.

What other activities do you use to help children understand who questions and talk about characters in stories?

The next post in this series is about the where of stories.  You can find it here.

Language
Narrative, preschool, primary school
How to be a terrific TA!
Games to improve auditory memory