One thing that SLT’s become good at is looking at everyday children’s games and toys and thinking of multiple ingenious ways of using them! Everything you have in your therapy cupboard / bag needs to be fun and useful in a number of ways. In fact I love showing other SLT’s new resources and seeing how they would use it. For example the post box is obviously for posting, but can also be somewhere for teddy to hide when practising our prepositions “teddy is IN the post box”, “no he doesn’t fit THROUGH the slot!” One young man I work with is positive my post box is actually a chair for him to sit on! 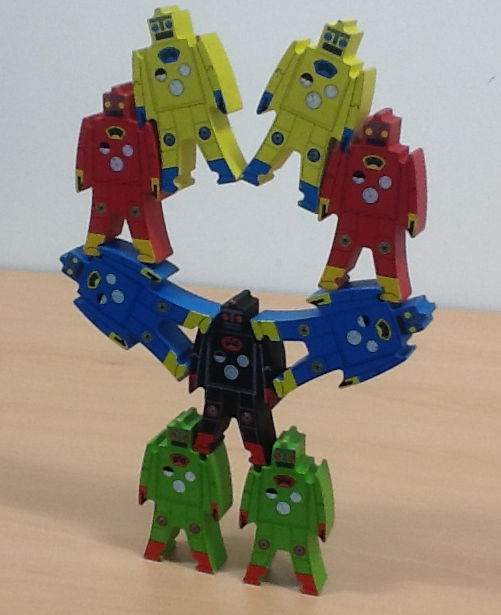 . They are brightly coloured and seem to grab the attention of boys and girls of all ages. I have used them with children as young as two and as old as eleven; immediately making this a very versatile resource and worthy of a place in my therapy bag! Then you add on the fact they are a great turn taking toy and also help with a child’s fine motor skills.

With the younger children I have used them to practise colours, numbers and body parts. It’s also a great attention and listening game; stacking up a few robots and then playing ready, steady, go and knocking them down. I also use them as a motivator for phonology or language games.

In the last few weeks I have also discovered a new use for them as an interactive toy. One young man I work with who has a diagnosis of autism and has just started to talk, loves my robots as he can line them up in colour order. One day he lined them up on a table against a wall. I put my finger on one robot and pushed it up the wall and stacked it on top of the robots next to it whilst saying “up, up, up, up”. The child quickly put it back, and I said “down, down, down” as he did it. This pattern went on for a few turns and then he started to smile as I stacked the robots and he allowed me to make the tower higher. He also stacked the robots and looked at me so I repeated “up, up ,up”. After five minutes he was giggling and letting me put the robots up and down, which he had not let me do before- fab! Then the best bit – he started to say “up, up, up” and “down, down, down”. Both his 1:1 and I were very excited! The next week when I went in, his 1:1 reported that she had used the “up, up, up”, “down, down, down” to help him tolerate having his sleeves rolled up and down to wash his hands and he often joined in saying up and down! What a great generalisation from a simple toy!