How to teach prepositions: behind, in front, next to - Speechbloguk

How to teach prepositions: behind, in front, next to

Back in 2014, Elizabeth wrote a post about helping a child to understand the prepositions in, on and under.  (I can’t believe it was that long ago!!)  You can find that post here.  Once your child is able to understand and use these in sentences, you may want to move on to other position words.  The process for teaching them is very similar to what is described in that post, but there are some slight differences. 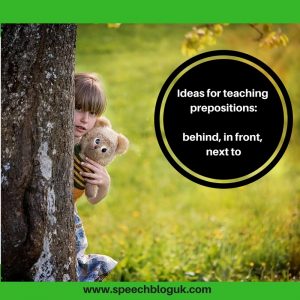 Usually when working on speech and language targets, I suggest that people sit opposite the child to encourage eye contact.  Teaching behind and in front is an exception to this!  Imagine you have a box in front of you.  “Behind the box” is going to be in a different place depending on which side of it you are sitting.  This is very confusing so make sure that your behind is the same as their behind!!  (There’s a sentence that sounds interesting out of context!)

Also, start by using places that have a clear front and back to make it easier.  For example, a doll’s house or even your sofa at home if you don’t mind things being put behind it!  It is likely to be easier for a child to understand how “behind the house” is different from “in front of the house” than it is with an item which could go any way round such as a box or table. You can move on to the harder ones later.

Teach these words one at a time.  I usually start with behind.

Here are a few other ideas to help with understanding and using prepositions.

Once your child has a secure knowledge of behind, go through the same steps again to teach in front and then next to.  You can also do other position words in the same way – between, near etc.

Uncategorized
Something for the weekend: Vocabulary
5 things to do if you are worried about a child’s speech