Adjectives are really important words in a sentence.  For example, think about these three sentences:

The man took a walk through the forest.

The old man took a long walk through the dark forest.

The elderly man took a meandering walk through the gloomy forest.

The first sentence makes sense but the adjectives (describing words) make a big difference to how interesting the sentence is.  More sophisticated adjectives make for an even better sentence.

As kids move into Junior school (7+) and begin writing longer stories, using adjectives is often a target for them to move into higher-level writing skills.  Many children (especially those with speech and language difficulties) don’t use many adjectives in their spoken language and therefore it’s really hard for them to use these in their writing.  Here are some ideas of how to work on adjectives with children.  Remember that there are many, many adjectives!  As you play some of these games, you are bound to come across words which are new for your child. Pick one of these, write it down and talk about it again to help expand your child’s vocabulary. 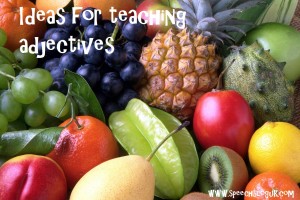 There are also some nice published resources that are great for working on adjectives.  Some of my favourites are:-

Apples to Apples Junior – The Game of Crazy Comparisons!

Speak Clearly Word Families Collection – this is one of my favourite ever resources – I use it all the time!  It’s not designed for working on adjectives but it is one of the many targets I have worked on with the “Link It” games – if I am focussing on adjectives, I ask them to think of an adjective that links the two items – eg they are both round, or both green or both sharp.

A couple of other thoughts about working on adjectives.  Encourage your child to think about size words and colour words to start with if they find this hard.  However, many children tend to get fixed on these, so after a while, I sometimes ban size and colour words so that they have to think of others.  Encourage them to use all 5 senses to think of a wider range of adjectives.

Also, when you do games where you generate multiple adjectives, talk about what order they go in.  For example, it doesn’t sound right to say “a green big apple”.  It is “a big green apple”.  There are a lot of long and complicated rules about adjective order, but many kids can tell you which sounds right if you give them a choice.

What other games and activities do you use to work on adjectives?