Grammar can be very tricky for some children.  This is hardly surprising when you think about it – there are so many rules about how sentences fit together.  A lot of these centre around verbs (action words).  Take a simple verb such as “jump”.   We change this depending on the sentence.  You might say “I jump on the trampoline”, “I jumped on the trampoline” or “I will jump on the trampoline”.  These all mean slightly different things.  (There are lots of other tenses too, but we will stick with these for today!) 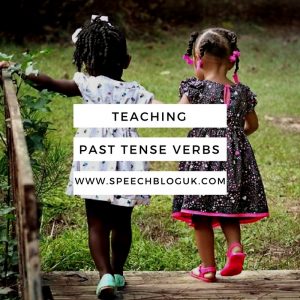 The first thing to say is that many of the verbs we use most often are not regular.  Many of them have past tense forms that you just have to know.  For example, “go” becomes “went” and “eat” becomes “ate”.  Be aware of this, but I’m not going to focus on it today – we will come back to irregular past tenses another day.

Secondly, there are various reasons why children might struggle to use past tense verbs in their speech.  Some may have difficulty understanding the concept of things happening in the past.  Others understand the concept but find it hard to know when to use it.  Still others struggle with them because of speech sound difficulties.  For many children with unclear speech, grammar can become a problem, because adding the extra sounds onto the end of a word can be too challenging for them.  Using past tense verbs can be very tricky as it can mean blending several consonant sounds together at the end of a word.  For example, when you say “jumped”, the sounds you actually say are “jumpt”.  Putting three consonant sounds together is hard!  These children may know very well that the sounds should be there, but they find it hard to articulate them.  If you are going to work on past tense verbs with a child, be sure that they can pronounce them.

The first thing I always do is to introduce the idea of the past tense.  This is quite an abstract idea and can be hard to explain.  Usually the best way is to do it.  I get the child to do various actions with me and then we talk about what we did.  For example, we both jump up and down.  As we are jumping, I say “we are jumping”.  When we have finished I say, “what happened?  We jumped.”  We do lots more examples like this and I point out the difference between the words.  First I get them to listen to me and then I ask them to say what we did.

If I ask them what happened and they say “we are jumping” or “jumping”, I say “are we jumping now?  No, it’s finished.  We jumped”.

Top Tip – Make a list of verbs to use before you start this, to make sure that they are regular!  Here are some ideas – jump, hop, wave, clap, walk, shout, dance, point, crawl.

Once I am sure that the child understands the concept, I use verb pictures to do lots of practise.  (Again, sort the pictures first so that you only have regular verbs in your pile).  This time, the picture will usually show a person doing something.  I explain to the child that we are going to talk about it like it happened yesterday or like it is finished.  What did they do?  We practise lots of different sentences with past tense verbs.

Another great way to do this is to take pictures of the child doing lots of different things, then ask them to tell the story of what they did by looking at the pictures.  This is more meaningful because they know it is something they did which is now finished.  EG “what did we do this morning?  We painted pictures, we listened to the teacher, then we played in the playground.”

Once the child has grasped the idea, it is a really easy thing to practise throughout the day, as we are constantly talking about things we have done.  You can use stories to practise too – see if your child can tell you back the story using one simple sentence for each picture and a past tense verb.

There are a few particular errors that I come across regularly when I am working on this.

Once your child has mastered regular past tense verbs, you may want to move on to irregular ones.  We will talk more about these another day.  What else do you do to teach regular “ed” endings to children?