"The Reason I Jump" book review by Helen - Speechbloguk

“The Reason I Jump” book review by Helen

A couple of months ago, I was in my car on the way to a child’s Annual Review meeting when I switched the radio on and caught the end of a programme that really captured my attention.  It was someone talking about autism.  Someone not just describing how people with autism can behave, but someone explaining why, simply and succinctly as if they had been there personally.  As the programme drew to a close I heard that it was a reading of a book by a Japanese boy with ASD (Autistic Spectrum Disorder).  I found the book in a bookshop and took it away on holiday to read.  The book was “The Reason I Jump”

Naoki Higashida is a Japanese boy with Autistic Spectrum Disorder.  He does not really speak, but has learned to communicate by pointing to letters on a cardboard keyboard, and using this method, he wrote “The Reason I Jump” when he was 13.  Most of the book is structured as a series of questions about autism which the author seeks to answer – questions such as “why do you ask the same questions over and over” “why are you obsessive about certain things?” and “when you look at something, what do you see first?”  The answers are interesting and sometimes complex.

He talks about feeling disconnected from his own body, as if he has little control over what it does.  He talks about finding it hard to focus on things as his brain is doing loops and constant flashbacks which can feel as real as when the event actually happened.  He explains how he is constantly moving because he feels anxious and permanently trapped.  However, he also talks about the things he loves about being who he is.  He talks about the joy of perceiving and wondering at the details of objects.  He talks about loving nature and how feeling at one with nature makes him feel calm and at home.  He explains how he understands more than people think he does and how he enjoys the company of others, even though people often think he doesn’t.

At the end of the book, there is a short story about a boy who dies and then tries to connect with the everyday world and can’t understand why no-one responds to him. 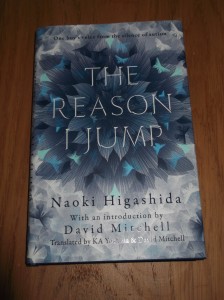 I’m sure not everyone with autism would agree with everything this author has to say.  People with autism are just as complex as everyone else and to say that they all think exactly the same way would be as nonsensical as suggesting that all women think the same way, or all 10-year olds.  However, I found this book useful for getting an insight into the mind of someone on the autistic spectrum and I do recommend it for anyone with a child on the autistic spectrum or anyone who works with people with ASD.

Finally, a word about the translators of this book.  David Mitchell is a British author who has twice been nominated for the Man Booker prize.  (No, he’s not the same guy as the comedian – I bet he gets really fed up with people pointing that out!)  He and his wife KA Yoshida have a son with ASD.  His wife is Japanese and they have both lived in Japan, so they translated this book together initially for their son’s therapists to read.  Being a talented writer, David Mitchell is obviously able to talk far more eloquently about this book than I can!!  He has written a fantastic article here, about his son, coming to terms with his diagnosis and why he translated this book.  It’s well worth a read.