When I was a newly qualified therapist, there was so much to think about whenever I assessed a child – which assessment to use, transcribing speech correctly, asking the right questions in the case history, making the right decision about what to do next!…  But there is one aspect of doing an assessment which is really important although it’s easy to overlook it – building a rapport with the child.

However short you are on time, it’s always really important to take the time to make the child feel relaxed and at ease.  This is also probably the best possible way to ensure that the parent feels relaxed and at ease too!  Building rapport is something that it’s hard to make rules about – to an extent, you just need to be good at reading people and working out what they need.  However, here are some of the things that I find can help. 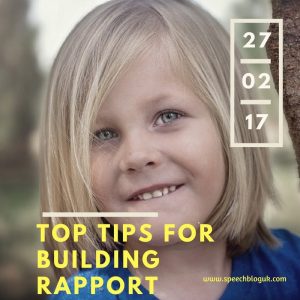 What are your favourite tricks for building rapport with the children you work with?  If you are a parent, what have you seen professionals do that has worked well with your child?

Advice for SLTs
play, rapport
Tips for setting up in independent practise
How to use nerf guns in speech therapy!