Understanding language can be hard! by Elizabeth - Speechbloguk

Understanding language can be hard! by Elizabeth

Last week my son had been invited to a friend’s 6th birthday party. It was an organised affair at a local sports centre. First, all the children were linedup and skilfully ushered down to the bowling alley, by some very enthusiastic 18 year olds, who for the most part had every child listening. All the children had a great time bowling and then were again herded to another room for their party food. A fab time was had by all with much giggling and laughing. 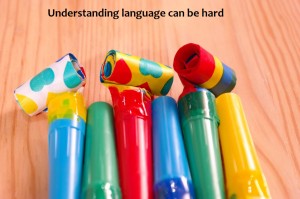 What amazed me was the level of language used and that, for the most part, the children understood. The first instructions were fairly simple; where’s the birthday girl? everyone line up please, who’s ready to have some fun? During the bowling there were lots of whose turn and where’s so and so gone? Again all fine. It was during the party food that things really stepped up a notch! Whilst organising who eats what and who can’t eat that, there came a massive instruction of ” if you want black current touch your nose, orange put your hand up and water wave your hands” to which every child made a choice and received a drink. I was amazed. It makes me think about ‘normal’ language development and how tricky the children I work with find everyday language. Most of the six year olds I am working with are learning to understanding at a two or three word level. The initial question words would have been tricky, let alone a massive three part instruction where you have to make a choice!

It also makes me think about how language difficulties impact on every minute of a child’s day. Even something fun like going to a friend’s birthday party is a mine field of words and language. What about the language used every day in the class room? What about the language used at home? Many children with language difficulties can cope with harder language when it’s in a known context and familiar setting. So what about when something new happens like a trip or changing class?

Language is hard, and language difficulties are an unseen disability that can go unnoticed. BUT with simple changes on our part we can make things much easier for these children:-
– make sure they are listening before giving an instruction or expecting them to do something
– use simpler language, easier words and not as many!
– use visual support – if you are feeling brave a sign or picture is great, or just point!
– repeat yourself and check that the child has understood.

So just think, the next time you see a child ‘opting out’ or refusing, having a tantrum or not doing it right, maybe they didn’t understand.