I’ve recently rediscovered barrier games as a great way of developing language skills with children. I already knew about them, I just hadn’t used them so much for a while.

First of all, let me explain exactly what I mean by a barrier game. These can be done individually or with a group of children. The idea is that some kind of ‘barrier’ is put up between the participants in the game (either an adult and a child, or between two children). Then one person gives instructions for another person/people to follow. So for example, one person could draw a picture, then put up a barrier and describe to someone else how to draw the same picture. Or someone could set up a scene with a set of toys or build a Lego model and then explain to someone else how to create the same thing. A simple idea, but great for working on lots of different aspects of language skills.

There are lots of barrier games you can play with things you already have, like the ones described above (remember with objects or Lego that you will need two sets the same). However, today I’m going to share a barrier game I bought which is really good for older children (7+). 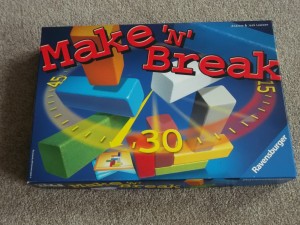 This Make n Break game comes from The Happy Puzzle Company, and I do recommend checking out more of their resources too – they have some great games, especially for older age groups.The box contains 10 long wooden bricks in different colours, and lots of pictures of different structures you can make with them. There is also a timer, though I don’t use this when I use the game for language work. The idea of the game as written is to make the structure on the card before the timer runs out, but I don’t play it that way! I use the box as a handy barrier (!) and take turns with a student to describe the picture on the card. Then we take the box away and see if the structure built is the same as the picture. Kids love it and it can be used to work on lots of different language targets, making a great, versatile game for any SLT’s collection! Here are some of the targets I have worked on with this game:-

What I really love about this game is that it has the cards already numbered in 3 levels of difficulty, 1 being the easiest and 3 the hardest, making it easy to differentiate the game to different levels. If you want a real challenge, some of the cards don’t have any colours on, which makes it a much bigger challenge to describe (I usually take these ones out, but they could be used, maybe with teenagers). 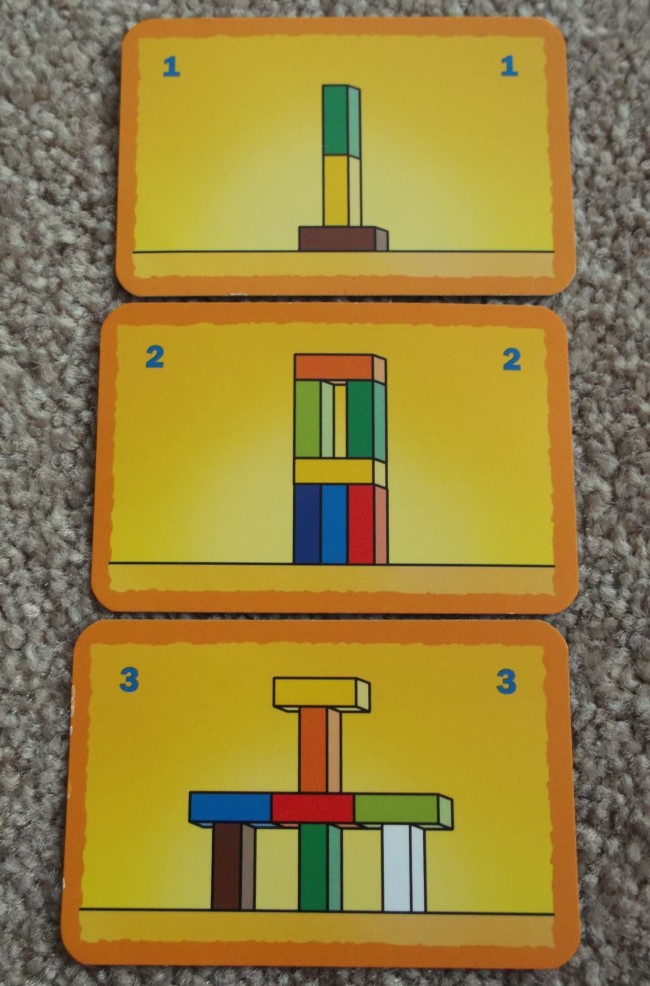 I have not been asked or paid to review this item, I’m just sharing something I find useful.