Many children who have speech and language difficulties benefit from using pictures, signs and other visuals to support their communication skills.  Visual timetables are very frequently recommended.  But who are these useful for and how do you use them? 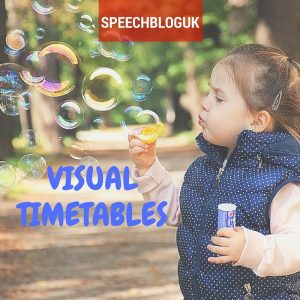 Who benefits from a visual timetable

How do I make a visual timetable?

A paper visual timetable does take a bit of time to make.  The best way to do it is to laminate a strip of card and attach velcro pieces to it.  Then laminate your picture cards and attach the other half of the velcro to the other side.  Then you can put up different sets of picture cards depending on what you are doing.  There are some lovely examples of visual timetables in this post so you can see what it might look like when it’s finished.

If you are in a nursery or school, the classroom or nursery wall is often the best place for it to be.  I have known some settings which have made really good portable ones as well though, using a clipboard or similar.  The aim is that the child can see it or access it most of the time.

I also came across a great app for visual timetables on the go.  It’s called ChoiceWorks and you can load up your own pictures or use their library of pictures and symbols. 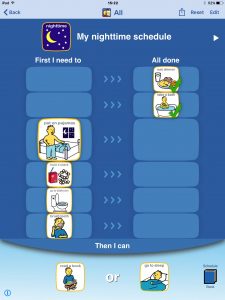 How should a visual timetable be used?

Put the pictures on the timetable strip in the order that they will happen.  Show the child the strip and tell them the first two items.  EG “painting first then circle time”.  Point to each picture as you say it.  Then say”painting time” again and take the child to the painting activity.

When the first activity is finished, show the child the timetable again.  This time say “painting finished” and get the child to take the painting picture off the strip (ideally, you’ll need a bag or box to put them into).  Then show them the next picture along (which will now be the first one).  Repeat for each activity.

One of the main mistakes I see people make is not taking the pictures off, or doing it themselves and not involving the child.  If you are using the timetable to support a child with understanding or changes, it is really important that they take the pictures off themselves.  This helps them to understand that the activity is finished and something else will happen now.

How many pictures should be on the timetable?

This is going to vary between different children.  Some children can cope with 7-8 pictures in a row but for other children, they cope better with just 2-3 at a time.  You will need to experiment a little.  Start with just a few and build up.

What pictures should I use for my visual timetable?

If your child is already used to a particular set of symbols, use those to keep things as consistent as possible.  For example, some settings will use Makaton symbols for everything.  For other children, these kinds of symbols are too abstract.  Alternatively you may not have easy access to them.

I found these lovely visual timetable pictures on Twinkl for free.  This is the home set, but there are other sets too for different age groups.  There are also more free pictures to download here.  Otherwise, take photos in your own home, nursery or school and print them off.  For example, use a photo of your bath for “bath time”.

What if the plan changes?

One of the difficult things about introducing a visual timetable is that it can sometimes be hard to know exactly what will happen.  To begin with, do try to stick to the plan if you possibly can.  Start off by using the timetable in very routine situations, such as bedtime, where the same things happen in the same order.

Once your child is used to a visual timetable and understands how it works however, try introducing an “Oops” card.  When things change, you can put the “oops” card over the top of the other picture (or replace it) to show the child that things have changed and something different will happen.

It’s probably better not to wait until there is a crisis to introduce the “oops” card!  Plan a change and introduce it then.  If the child finds it very difficult, still do it, but keep the change short and then return to the original plan.  Do this several times (on different times and days) and hopefully your child will begin to understand that changes sometimes happen and that’s ok!

Finally, be on the ball!  Some children get wise to the visual timetable after a while and will try to change the pictures over to things they want to do!!  This is a great sign that they understand the timetable, but try not to let them take charge of all the plans!