What speech sounds should my child be able to say? - Speechbloguk

What speech sounds should my child be able to say?

I’ll be honest – we’ve been putting off writing this post.  Speech sounds are something we work with all day every day and we are constantly making judgements about whether a child’s speech clarity is within the average range or not.  However, it’s difficult to summarize it in a post like this.  I know it’s information that lots of people are looking for online though, so we’re going to give it a go!

Why is this so complicated?

There are various different sets of guidelines that are used quite frequently.  I will get to some of these in more detail in a minute, but first of all, a few words about age norms.  Just like all age norms for children’s development, there will always be variability.  Some babies walk at 10-11 months, others not until 18 months or later.  Similarly, some children will speak really clearly right from their first words, and others take much longer for their speech to become intelligible outside the family.

Also, although they are similar, the different sets of age norms that we work to are not all exactly the same.  That’s because they were researched in different ways and at different times.  There will also be some variation of what’s normal between different countries – certainly if English is not your child’s first language, there is likely to be variability in what sounds they use when.

Also, whether your child needs speech therapy or not is more complicated than looking at a speech development chart and ticking off the sounds you have heard your child say.  When a speech therapist assesses a child’s speech sound development, they will ask them to say a range of words which are designed to show how the child uses each sound in lots of different contexts – at the beginning of a word, at the end, in the middle, in different syllable types, in consonant blends (eg pl, spr or cr).  They might ask your child to say individual sounds, single words and sentences and compare their use of the sound in all of these.  Their level of concern will also depend on a few other factors:

As you can see – it is not as easy as looking at a chart.  Now let’s return to the question of which sounds your child is using instead of their tricky sounds.  Some sound substitutions are very common in young children.  These patterns are known by therapists as “normal phonological processes”.  For example, many children say “t” in place of “c/k” to begin with.  Hearing a child say “tar” instead of “car” is an expected pattern.  However, if a child were saying “sar” instead of “car” that is more unusual, and therefore more of a cause for concern.  If a child is using these more unusual errors, their speech sound development is described as being “disordered”.

However, that is not to say that I would never be concerned about “tar” instead of “car”.  If a 5 or 6 year old is still saying it that way, then their speech sound development would be described as “delayed”.  This means that it is following the usual pattern but they are still using some sound errors expected at a younger age.  I might advise therapy earlier for the child saying “s” instead of “c/k”, but I would eventually advise therapy for the child saying “t” instead of “c/k” too if it doesn’t resolve naturally.

So, how do I know whether to be concerned about my child’s speech or not?

The first and most important thing to say is that the internet cannot reliably tell you whether your child’s speech is within the average range or not.  If you are concerned, do seek out an assessment.  I know this can be easier said than done at times, so while you are waiting, here are a few ideas of what to do to get a better idea of whether you should be concerned or not:-

So, after all that, here is a chart based on the work of Shriberg (1993), who found that there is some consistency to the order that children tend to develop sounds.  Here the sounds are split into 3 groups – early developing, middle developing and later developing. 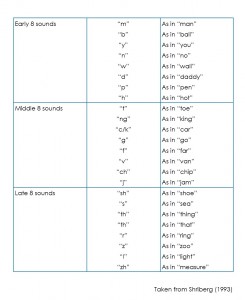 This gives some idea of the order in which children generally use sounds.  If you want to look at other speech sound charts based on different research, there are several laid out in this post about speech sound development.

Also, take a look at this post about the process of speech sound therapy.

Finally, if you want expert guidance through the process of helping children with unclear speech, come and join our online course.