If your child or a child you are working with is having speech sound therapy, it won’t take you long to realise that there is a lot of repetitive practise involved!  It’s very likely that at some point you’ll be given a set of pictures or a particular sound or set of words to practise with your child.  The tricky bit is keeping this motivating for your child (and you!)  The best way to do this is to play as many games as you can.  This post is all the ideas that we could think of games to play to practise speech sounds (part one – there are too many for one post!)

First of all, you will probably have been given a set of pictures by your child’s speech and language therapist.  However, if you haven’t and you want a set of pictures of words for the sounds you have been asked to practise with your child, you can find some free to download here or here.

Now without further ado, the game ideas.  I’ve split these into sections to help you find what you want:- 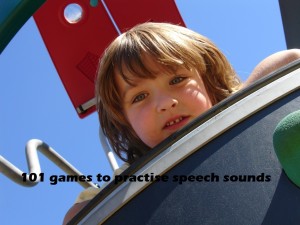 Games to play with just a set of pictures

You don’t need to buy anything special to practise speech sounds.  However, you may find you have games like this in the house already, or want to buy something new.  Basically any simple turn-taking game can be good to make speech work more interesting.  It needs to be a game with short turns to that you spend more time practising than you do focussed on the game!  The idea is that whatever game you’re using, you ask the child to say their word, sentence or string of words/ sounds before they take a turn.  Here are some games I’ve found that children of different ages enjoy.

Read part 2 of this post here – ideas for games without picture cards, games for particular sounds and apps.