It’s almost the end of the school year!  We may be still waiting for the sun to come out in the UK, but lots of us are winding down for the end of term and getting ready to go away!  Whether you are at home or away during the school summer break, you are likely to be travelling somewhere at some point.  Keeping children entertained on the move is always a challenge – but it’s also a great time for conversation and to expand language skills in a fun way.

So today I’m going to share some of my favourite word games to play with children while travelling.  Most of them are aimed at primary school aged children (5-11), but I have included ideas for making the easier or harder for children with varying levels of language skills. 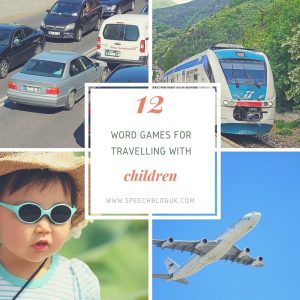 Do you have any other favourite word games to share?

Advice for parents
travel games, word games
How to use Dinosaurs in Speech Therapy!
Rhyme – advice and ideas