As Elizabeth mentioned earlier in the week, we have been sent some lovely stuff to review.  Our giveaway for the Key Verbs app is still open for a few more days – we have 6 copies to give away!  Do click the link to read the review and enter the giveaway!

Today, I’m going to review two more great games from Orchard Toys.  We talk about their games a lot here, as they are great fun, educational and versatile.  What more could you want?

The aim of this game is counting and adding numbers up to 10.  If you happen to have a child in their first year at school (as I do!) it’s a great game to use just as it is to practise these skills in a fun way.  However, this is a speech therapy blog, not a Maths blog, so here are some ideas of how to target language skills while you’re playing this game! 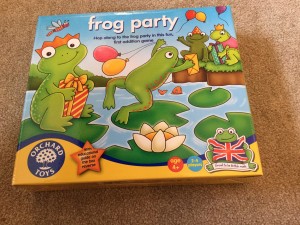 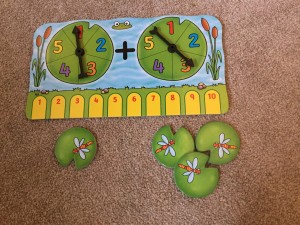 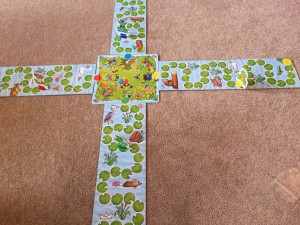 This game is an early spelling game, but it has various possibilities for speech and language word too!  First of all, let me explain how to play, according to the rules.  There are double-sided cards for 3 and 4 letter words and letter cards to spell the words out with.  One side of the cards has the word spelt out so that children can just match the letters and the other side has blank spaces so that they can spell the word out themselves.  Players take turns to find a letter to go with their card.  This is a simple but effective idea and there are various ways to alter the level – you could reduce the number of letters or give the child part of the word and get them to find the rest for example.  Here are some other ideas of how to use this game. 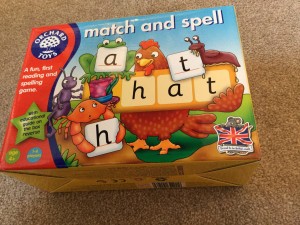 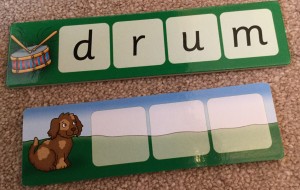 All in all, two more great games from Orchard Toys.  Watch out for another Orchard Toys review next week.