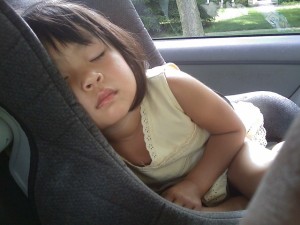 I often hear people describe children’s speech as being “lazy”.  I know why they do this – it can be difficult to describe exactly how a child’s speech sounds if you don’t know all the correct terminology or just know it doesn’t sound quite right.   It is usually used to mean that speech sounds are not always clear, that the child’s speech sounds a bit mumbled, or that they are missing endings off of words.  Sometimes people will also say that a child is “lazy” with his speech, because he is not really talking much at all at 2 years or older.

I don’t have a problem with people using whatever terminology makes sense to them to describe to me what the problem is.  However, I do have a problem with the idea that children who don’t speak clearly are being lazy.  It suggests that someone just can’t be bothered to put the effort in to talk.  But for those of us without a communication difficulty, talking isn’t work.  We think about what we’re going to say, particularly in certain situations, but we don’t spend time thinking about how our mouths will move.

Also, what happens when a child is not understood?  They are asked to say it again.  Usually, if the child has a communication difficulty, they say the same thing they said the first time and so they are still not understood and are then asked to show someone, to point etc.  In other words, not being understood took more effort, not less!  It’s not fun not to be understood, so generally, I think people speak as clearly as they are able to at the moment, and thinking of it as being something a child is doing deliberately is not really helpful.  What we need to do is to acknowledge that it is hard for them, and support them in communicating better.

This doesn’t mean that children don’t sometimes need encouragement to use language to communicate (or to communicate at all).  If you’re doing your best to talk to people and you tend to get met with a blank look , it’s easy to give up trying and just wait to be given things or let others talk for you. However, we need to think differently about why a child is doing that.  Is it because they are too lazy to ask, or is it because they have learnt to do that by repeated experiences of trying to talk and not being understood.

However, here are some suggestions to help children to be more confident communicators:-

Above all, aim for successful communication, rather than clear speech to begin with.  The more they are understood, the more the child will try to communicate, and the more they try, often the clearer their speech will become.