Phonological awareness can be defined as the ability to explicitly access and manipulate the sound structure of spoken words – Hatcher, Duff and Hulme, Sound Linkage, 2014

So, what on earth does that mean?!  It’s probably easiest to explain it by talking about some of the skills that are involved in phonological awareness.  These include:- 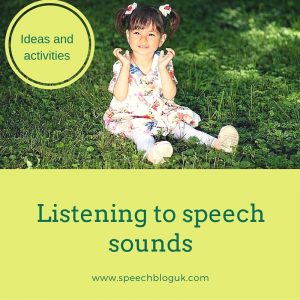 At first glance, it seems like a lot of these skills could be due to a hearing difficulty.  Of course, children with hearing difficulties are likely to find these sorts of things challenging, but most children who struggle with phonological awareness don’t have a problem with their ears at all.  It is more about the child’s brain not recognising differences between sounds, than their ears not hearing them.

When I work with a child who is struggling with saying a particular sound, one of the first things I do is to check that they are able to tell the difference between sounds.  For example, if a child is saying “tat” instead of “cat”, can they reliably recognise a “t” sound and a “c/k” sound when they hear them.  I am going to give you a few activities to practise this, but before I do, there are a few important things to be aware of:-

Listening to different speech sounds over and over again is potentially quite a dull activity for a child.  It is important to try to keep it fun to keep them motivated.  Here are some ideas of how to do that:-

What other activities do you use to practise listening to different speech sounds?