So here is the next in our series on Narrative Therapy.  If you haven’t seen the others it might be an idea to have a look first!  You can read about the introduction, who/character, where and when.  Then today I am going to concentrate on what happened. This is main part of the story. 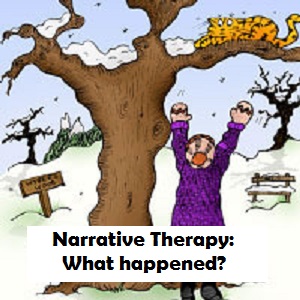 You have set the scene – discussed which characters are in the story, thought about where they might go and when they might go there.  Now it’s time to move onto what actually happens in the story!  With younger children, this is a great time to practise some basic cause and effect type sequencing, or use basic stories where the what happens can be easily remembered.  Here are some ideas of how to practise what happens:

– Using basic 2 step sequencing pictures, you can encourage the children to think about what might happen next.  Talk about the first picture and keep the second one hidden. Discuss the story elements; who is in the picture, where are they and when could it be.  Discuss what is happening in that pictures.  Then you can encourage a discussion of what might happen next.  After the children have generated some ideas  you can show the second picture.  When I run this activity, I always find the children end up competing to get the answer on the second card!  We spend time reinforcing the idea that all the answers are correct not just the one on the picture.

– If the child struggles with this, you can make the task easier.  Recap what the character is doing and then pause, sometimes the child can fill in the rest e.g. The boys on the slide, he’s sitting down and….  If the child still struggles you could give a forced choice. For example “does he slide down or jump off?”  You could also give a silly option, although the child may pick the silly idea. For example “Does he eat a banana or slide down?”

– Use familiar stories.  At this point in the group, I often revisit the books I use for the who, where and when.  The children are familiar with them and before you turn each page you can ask “what happened next”

– The Black Sheep Press packs have some great ideas and resources for what happened.  One of my favourites are some story starters.  You get three pictures setting the scene, and then you do have a what happens next card, but with support the children can create lots of ideas.  One that always gets good ideas is about a group of children going for a walk in the forest, when suddenly it starts to get dark and they hear a noise…… So what happened next?  Often it is dragons or bears, but it provokes some great discussion!

With older children I love the way the Black Sheep Press, from oral to written narrative pack breaks it down.   Rather than a lump of what happens, you break the story down into the problem and then the solution.  The characters can also have more than one problem in the story, or may try lots of different ways to solve it.  You then go on to think about how that would make the character feel, if that changes over time and what they might say – which is fantastic to tie in with literacy targets!  We will talk about that another day though.

Again the resources in the Black Sheep Press: Oral to written language are fantastic. I couldn’t run groups without them!  They start working on the idea of identifying the characters problem and then encouraging as many solutions as possible.  They start with scenes from children’s stories that they are likely to recognise and then move onto more real life situation.  There are work sheets for practise and story planners to help the children record their ideas.

It is very interesting to see if the children can identify the possible problem from the picture.  This skill of extracting the key information is tricky for many children with language disorders.  We often describe it as being like a detective looking for the clues!  They then encourage the children to identify all story elements; who, where, when, problem and solution.  The worksheets are great to give out as homework.

Once the children are secure at this level, you can move onto randomly selecting a who, where and when and then seeing if you can generate a story. I love using these story spinners for this bit.

You can also reinforce all the story elements and encourage the child to indentify the problem and solution using familiar stories.

That was a brief tour of what happens.  Read the next part of this series by clicking this link.  The next post focusses on extending “what happens” into emotions and dialogue for older children.