Helen and I love finding new games.  It helps to keep the children motivated and it also means we don’t have to play pop up pirate 10 times a day! It can be tricky to find games for older children so I thought I would tell you about a few new finds. 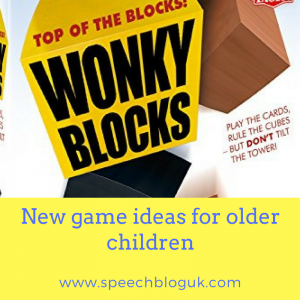 This is a surprisingly tricky game!  I have been using it with year 5 and 6 children.  It would also be great for secondary school children.  It has really grabbed the attention of some of my children and they have played it for the whole session.  Interestingly they were keen to know what the record was and who else had managed to stack them up!

You get 9 blocks – 3 large, 3 medium and 3 small.  The game comes with cards which you are supposed to pick to tell you which size/colour of block to put on next.  I must admit I haven’t used these as they make the game impossible!  The idea is that you stack the blocks up until the fall over.  However, its not that easy!  As the name suggests, the blocks are wonky! So you have to look at the curves and decided which way the block is most likely to stack.  So far I have had 1 child stack all 9 blocks! 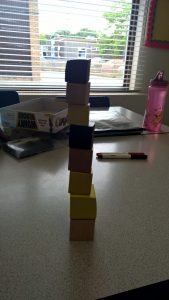 I generally use this as a motivator game.  This means that before the child gets to add a block to the tower they have to complete their target.  This may be saying a sound or word, answering a question or changing a verb into the past tense – what ever you are currently working on.

I have also used this as a description game.  I encourage the children to explain why they have chosen a particular block.  The idea is that they try and verbalise their thinking.  This can also lead to discussions about cause and effect, why one block worked and another didn’t etc.

This is another tricky balancing game!  The boat sits on the iceberg and the idea is that you balance as many of the penguins as you can before they all fall off.  To actually get all the penguins on, you have to think about where you put the penguins and keeping them balanced. 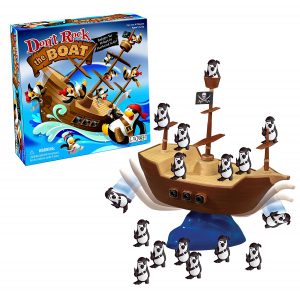 Again I use this as a motivator game, so you can use it to work on any target.  I have used this with slightly younger children – Year 3’s so 7/ 8 year olds and upwards.  If they are finding it really tricky or getting frustrated I give them a hint that if you put two on at time it makes it easier!

Now this is a little cheeky as we have just written a review about this fab app. You can read that post here.  I have been using this app for a few months now and am finding it really useful for targeting expressive language skills in older children (as well as inferencing skills!) 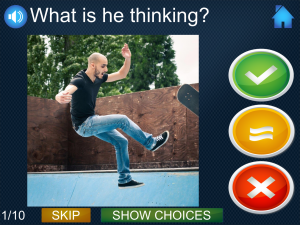 As the pictures show different situations and are designed to make you thinking about what has happened, I find they are also great for forming ‘because’ sentences and also teaching children to form questions.  You can also work on sequencing when you think about what is happening now and then what the people will need to do next.

So that is my latest selection of games!  What else do you like to use in therapy?