Helen and I have been very fortunate and have some great resources and apps to review.  So now it’s the Easter holidays and people may even have a little money to spend with the new tax year, we thought we would blog about some of them!

Helen recently reviewed one of Orchard toys new games – Rockets and comets.  I was lucky enough to receive another of their new games – the Pirate Race Game

.  One of the many things I love about the Orchard Toy games are the great colours and images they use and the fantastic durability of their products.  This new game did not disappoint! 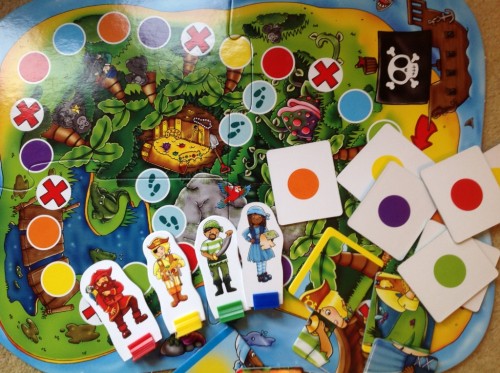 The Pirate Race Game currently retails for £9.50 and is aimed for children between the ages of 3-10.  There are 4 pirate characters (2 men and 2 ladies!) and they have to travel round the island collecting all 6 pieces of their puzzle, before racing to the middle to claim the treasure.  The game encourages colour matching/ naming as well as counting and turn taking skills.

Most importantly, it’s pirates! Which are obviously cool! I have had a number of children ask for me to bring it back next time as they want to play it again.  Plus there is lots of great pirate vocabulary you can teach at the same time.  You have pirates, ships and treasure, but also crocodiles, mermaids and sharks!  This can also lead to some good discussion about what they are doing there and what would happen if the pirates found them! I had everybody, animals included, walking the plank one day!

You then have the colour matching element of the game. At a basic level, you land on a coloured circle and have to find a card with the same coloured circle on.  You can extend this and ask the child to name the colour as well.  The game also helps support visual memory.  If you turn over a puzzle piece that isn’t for your pirate, you put it back face down. You then have to remember on the next turn, not to pick that one again, or equally if another player has turned over your pirate and where you saw it.  I did find that this was a bit tricky for some of my younger children, but it was easily fixed by only using the pirate puzzle pieces for our 2 characters, not the spare ones as well.

I have been using this game as a motivator for many of my children working on speech sound targets. So before they can roll the dice and move, they have to say one of my target words.  This would work equally as well for language targets.  I have found that this game can last a while, so it means you get lots of turns – which is good for older children.  For younger children who struggled to finish the game, I modified it and we just raced to the treasure to see who would win!

Orchard have done it again with another versatile, useful game. You could use it for:-