Our recent posts on speech sound development and the speech therapy process have proved popular.  Speech and Language Therapists tend to use specific terminology when we describe a child’s speech.  Although we all know what we mean by this, it isn’t clear to non speech therapists!  We aren’t expecting you to be an expert.  We just thought it would help to know some of terminology we use in our reports. 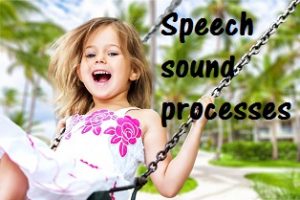 Now for the health warning! If you have concerns about your child’s speech, you should seek out assessment from a qualified speech and language therapist.  However we are aware that can be easier said than done in some areas.  Our advice can never replace an assessment, but we hope to give you some useful information.  When we have given ages for a particular sound this is only a guide.  If your child is older and isn’t using the sound yet, it doesn’t mean necessarily mean that they do or don’t need therapy.  It may however indicate that they would benefit from an assessment.

We have discussed what sounds your child should be able to make by certain ages.  But today I am going to write about some of the different errors or processes that we are listening out for when we assess a child’s speech.

In your first year at university, speech therapists learn all about how sounds are categorised.  Every sound the human mouth can make is described by three elements – Voice, Place and Manner.  That takes me back to my phonics exams where we were asked to make a voiced bilabial click and trying to make a trill (which I still can’t do!)

So now we know how and where the sounds are made, we need to think about what happened to the sounds if a child is making errors.

This refers to a sound that is made at the back of the mouth e.g. k or g, being bought forward in the mouth or being fronted, normally to a t or d.  So for example car would become tar, get would become det.  This is a more common error and we would expect it to resolve between the ages of 3 1/2 to 4 1/2.

This is the reverse of the above process.  So a sound made behind the teeth e.g. t or d is made at the back of the mouth as a k or g.  This would mean that door becomes goor and tea would be said as key.  This is a more unusual error and is sometimes seen as part of a phonological disorder.

There are sounds called fricatives and these are produced on a long stream of air – s and f for example.  Younger children often ‘stop’ these.  So f often becomes a b, s becomes a d.  This would mean that fish is said as bish and sun would be said as dun.  This is a more expected error.  We would expect f and s to resolve between 3 1/2 – 4 years old and v and z to resolve between 4 – 4 1/2 years old.

Affricates are sounds such as ch and j.  When they are deaffricated it means they are reduced to either a stop – d or a fricative – s.  This means that chip maybe said as dip or sip.  This is a more common error and we would expect it to resolve by around 5 years old.

This is where the r becomes w or l becomes a y or a w.  This is again a more common error and we would expect it to resolve by around 6 years old.

Most of the sounds we make come in a pair with a voiced and voiceless sound.  For example p and b, where p is voiceless and b is voiced.  This refers to whether your vocal cords are vibrating or not.  So a voicing error is where a quiet sound is made noisy, so pea is said as bee or coat is said as goat.  This is a less common error.

You can also hear devoicing where a noisy sound is made quiet so door is said as toor or beetle said as peetle.

This is where the last sound of the word is missed off or deleted.  So for example grass would be said as gra and soap would be said as so.  This error should resolve between 3 – 3 1/2 years old.

In contrast this is were the first or initial sound of the word is omitted.  So toad would be said as oad and sunny as unny. This is a more unusual error and is normally seen as part of a phonological disorder.

This is where the weak or quiet syllable in the word is omitted.  So elephant would be said as efent or banana as nana.  This is an expected error and should resolve by around the age of 4 years old.

Clusters are were a word has 2 or more consonants together.  For example the bl in blue or the cr and sp in crisp. Younger children often miss the first sound off the cluster so spoon becomes poon.  Sometimes they miss out the second sound or change the sounds in the cluster.  We would expect this error to resolve by around 5 years old.

There are a number of other errors but these are the more common ones.