How to use... a car or train - Speechbloguk

How to use… a car or train

Cars and trains are hugely popular toys! Many children love them, and for some, it can be difficult to get them to play with anything else if there is a car or train in sight! The clinic I used to work in had a train track in the waiting room. This was great, but sometimes it could make it a challenge to get children to actually leave the waiting room – more than once I led them down the corridor with a train or suggested that they bring one of the waiting room trains into the session with them!

I always like to work with a child’s interests if I can, so it’s fortunate that there are lots of ways to incorporate vehicles into sessions or use them at home to support a child’s language development. Here are a few ideas:- 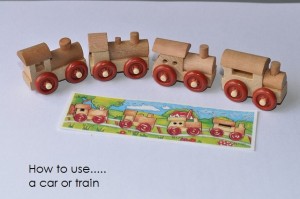 This is one of a series of posts on how to use simple every-day toys to promote language development. Click the links here to find posts about bubbles, a ball and a teddy or dolly. What other basic toys do you use in therapy or with your own child?