How to use... a ball - Speechbloguk

How to use… a ball

We write a lot of reviews of products and apps on this blog and share lots of exciting things we’ve found that are good for therapy. However, sometimes this can give the impression that you need to spend lots of money to support speech and language development and that’s really not true. You can use virtually anything around to support a child’s speech and language skills – it’s just about looking at what you’ve got and seeing how you can adapt it. That’s why we were keen to start a series of posts about how to use everyday toys that everyone probably has in their home or therapy cupboard. Elizabeth wrote a while ago about how to use bubbles in therapy. Today, I’m going to talk about another staple toy – a ball. 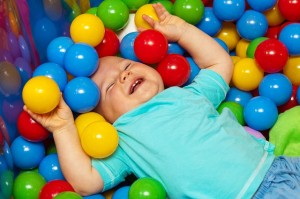 Since I travel around to different homes and schools, I’m always careful to choose a very soft ball (preferably one made of foam) so that I know that the likelihood of breaking someone’s antique vase is limited (hopefully to pretty much zero!) Of course, if you’re outside this matters less!…

Here are a few of the things I do with a ball during therapy:-

There are lots of obvious early language games you can play with a ball, as you can see. But it can be just as good a therapy tool with older children too. Here are a few ideas:-

What else have you done to support speech and language development using a ball?

For more posts in this series, look at how to use a teddy or dolly, a car or train, a box, a jigsaw puzzle and bubbles.