Today I’m going to talk about one of my favourite toys.  I bought my first set of these about 5 years’ ago (they recently had to be replaced) and I’ve also bought them as birthday presents for quite a few birthday parties that my daughter has been invited to!  Some toys or games I buy, I can be very enthusiastic about for a few months and then they get relegated to the back of the cupboard.  However, 5 years later, I still always have my stacking robots with me.  Why?  Because they are really fun and also really versatile – 2 essential qualities in any speech therapy toy. 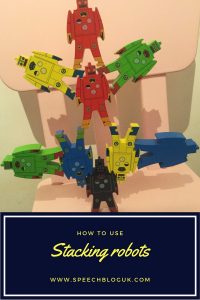 Elizabeth shared a story about how she used these way back in 2012.  You can read that post here.  Today though, I am going to share some of the many ways I have used these to target different speech and language skills. 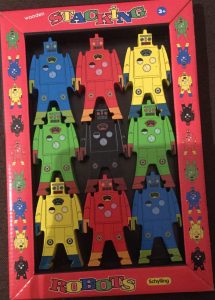 If you don’t have a set of these already and you want some, you can find them on Amazon here