listening to sounds in words - Speechbloguk

listening to sounds in words

We have written a series of posts about phonological awareness. This is the ability to hear and tell the difference between sounds both in isolation and in words.  You can read our other posts about listening to sounds, rhyme and syllables. 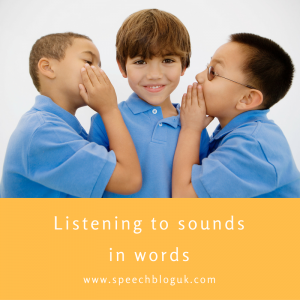 Once a child can tell the difference between two sounds consistently, you can move on to listening for sounds in words.  Do make sure you have gone through Helen’s post about listening for speech sounds first before moving onto words.  This is  a harder skill and normally starts to develop between the ages of four and five years old.  So don’t worry if your pre-schooler finds it tricky.

Being able to work out what sounds are in a word, needs the child to be able to segment or pull apart the sounds in a word.  For example they need to work out that car has a ‘k’ and an ‘ar’ sound it in.  When children first learn a word, they remember it as a chunk and have to work out that it is actually made up of different sounds.  This skill is key for spelling words and the opposite of blending sounds together that is needed for reading.

I work with a number of children at junior school (7-11 year olds) who are finding these skills hard.  There is an obvious and often significant impact on their literacy sills.  These children will need extra support and practise to gain confidence in these skills.

Below is an outline of how to teach this skill.  If you are going to work on this please make it fun!  Play games, take turns and mix in words your child finds easy as well as the ones they find hard.  Also with all the ideas below, we are saying the words and sounds.  We are not linking them to the written letter yet as this makes the task harder.

How can we help a child work out what the first sound in a word is?

Once your child understands the task you could try some variations.

Something else to try:-