Why and how to sign with children by Helen - Speechbloguk

Why and how to sign with children by Helen 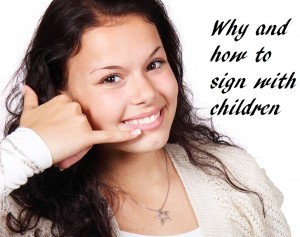 It often surprises people that I am a huge advocate of signing with children.  People often think that, since speech therapists are trying to encourage children to talk, we think baby signing and similar approaches will hold back verbal language.  Actually, nothing could be further from the truth!  Of course, children with hearing difficulties may learn BSL (British Sign Language) or ASL (American Sign Language) and use this instead of spoken language.  BSL and ASL are languages with their own grammar etc. and as such they are designed to be used with people who are going to use signing long-term as their main form of communication.  However, there are many signing systems adapted from these languages (or devised entirely separately) which are really useful to use alongside speech for babies or people with language or learning difficulties.  In the UK, the one used most often is Makaton, but there are also others, such as Paget-Gorman Signed Speech among others.

So why would we use signing with a child when we are trying to teach them to talk?  Here are a few reasons:-

It’s a difficult thing to suddenly start signing and people often feel overwhelmed by the idea.  So here are a few hints on how to introduce signing if your child’s speech and language therapist has suggested it or it’s something you’d like to try while you’re waiting for an assessment.

Don’t feel that you have to sign every word, just introduce a few signs at a time and try to use them as often as you can.  You’ll never manage to sign everything and it would be just as overwhelming as a constant stream of language can be!

How are you going to learn the signs to use?  Makaton courses are great, but can be hard to come by.  Contact Makaton or your local speech therapy department for information about trainers and courses in your area.  They also sell a range of books with the signs and symbols in.  Also the TV programme Something Special is great for younger children and also free! – watch with your child and learn together!  Alternatively, if your child is young and late to talk, you could consider babysigning – some groups such as Tiny Talk do courses for toddlers as well as those for babies.

It’s good to pick a system and stick to it, as if different people use different signs that can be confusing.  However, if all else fails or you just don’t know the signs you want, use gesture and make up your own – it’s more important to try than to get it perfect!

A word about older children before I close.  Signing can still be useful for children who are using language already, particularly those with comprehension difficulties.  I often use signs for particular new words (eg concept words such as same/different or big/little) or signs for question words to help children to understand which piece of information they’re being asked for.  It’s another visual way to support understanding and often easier and more portable than lots of pictures!

Do you have any tips about how to introduce signing or stories of how it has helped your child?  Do share them here.