This is part 4 of our series on understanding your child’s speech and language therapy report – if you haven’t seen the other posts, you can read the over view here, a post on attention and listening here and the last post on comprehension here. 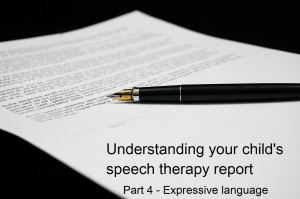 If your child isn’t yet using words or can talk but doesn’t like to, the report may talk about their ability and desire to express themselves.  You can have a child with a very limited vocabulary, say 10 words, but who can use sign language and natural gesture and express themselves very well.

If your child is younger, the report may well focus on the number of words your child can say and how they are linking them together.  As the child gets older these are still important points and will still feature in the report.  Many children have difficulties with learning words and increasing their vocabulary.   It is common for children with language difficulties to use very general words such as things and stuff rather than the specific word, or say they ‘did it’ or ‘got it’.  Some children will make semantic errors with their vocabulary.  This means that the word they use is in the same group, but isn’t quite correct.  For example, I was playing a describing game with a young man today where you had to give clues about a hidden picture to the other player.  When describing a bird he said, “It’s lots of colours, it flies and it’s covered in fur” Now he meant feathers, fur is semantically related, but not quite right.  You may see these difficulties referred to as word-finding difficulties.

As your child starts making sentences, the report may talk about different types of words for example conjunctions; these are words that link 2 sentences together like and, but, so, before etc.  It may also talk about adjectives or adverbs.  These are descriptive words that improve the quality of the sentence.  Many children with language difficulties develop basic sentences well, but have difficulties extending this further.  This in turn impacts on their national curriculum scores at school.  To achieve level 3 scores in literacy you need to use conjunctions and adjectives as well as better vocabulary and punctuation!

The report may talk about grammar – this incorporates elements such as marking the regular past tense with ‘ed’ or knowing that you have mice not mouses.  Many children make errors with these when they are younger, but most errors should resolve by 7 years of age.

You may also read about your child’s narrative skills.  This is the ability to tell or retell a story or event in a logical, sequenced and descriptive way.  You often find children who can hold a basic conversation and ‘chat’ without too many difficulties, but when they try and describe an event or story their sentences become jumbled and the meaning is lost.

Most of these areas can be expanded on and we may well write more posts on these things in the future, but hopefully this is an introduction to the terms you might read in your child’s report.

You can read the next part (which focusses on speech sounds) here.