This is the 5th part in our series about understanding your child’s speech and language therapy report.  If you have missed them, there is an overview, a post about attention and listening, one about comprehension and one about expression.

This post is going to look at speech sounds sometimes called phonology or articulation.  This section of the report will talk about how clear your child’s speech is, if there are sounds they are finding hard and it may comment on if your child’s speech is appropriate for their age.  You may well find lots of terminology and jargon in this section; consonants, vowels, CV/VC, blending, sequencing and maybe even some funny squiggles – the list goes on! 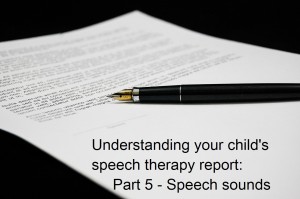 There are a few other areas that maybe mentioned under speech, or may have their own section, but I’m going to talk about them here!

If you are unsure on anything written in your child’s report, always ask your therapist.  But hopefully this might explain some of the terminology we use.

If you want to find out more about speech sounds, click on the link at the bottom of this post for a free e-book.  Also, check out our courses.

You can read the next part (which focusses on social skills) here.