A few weeks ago, Elizabeth posted about different ways that speech therapists use cueing to help children with speech sound difficulties.  We can also use cues to support children with comprehension and expressive language difficulties as well.  We thought it would be useful to share some of these here too.  As I planned this post, I realised what a huge topic this is – this will be very much a whistlestop tour today – do share other ideas in the comments. 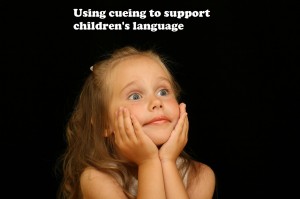 Signing is a really useful way of supporting children’s language.  This may not seem like an obvious thing to do with children who have some verbal language, but it can be so useful for so many reasons.  Here’s my post on why signing is useful.  With children with language difficulties, we always speak as well as signing as the intention is to use the signing to enhance their verbal language not instead of speaking.  Here are two ideas of how I use signing to cue children (there are many more):-

First of all, I often use visual cues to help children to give eye contact and maintain their attention level.  This in itself can help so much with understanding!  In a 1:1 session, I work to get eye contact, which often means moving my own position to make it easier for them.  I also often pick up pictures we are looking at or a toy that we are using.  I pause for a moment and when the child is watching it, move it up to my face to encourage them to look.

I also use lots of visual methods to directly support children’s understanding.  There are so many of these that I don’t think I can do much more than list them today, but there are many topics here to return to another day.  Here are some ideas of visual support methods:-

There are also lots of verbal methods of cueing.  When a child struggles to find a word or to answer the question they’ve been asked, here are some of the ways I try to help without actually telling them the answer.

There are many other ways that we cue children to help them use language for themselves rather than being told the answers.  One final thought – If the child is unable to respond even after some of these prompts, do also remember to consider that you may have have asked a question that’s too difficult to begin with!  We can all do from time to time!

What other ways have you found successful for supporting children’s comprehension and/or expressive language?